Here is a picture Mike took this morning of an eagle sitting on top of a Eucalyptus tree.  It wasn't there very long before the crows chased it away.  I'm not sure what kind of eagle it is.  If you do, let me know.

﻿
So he decides to pick up the peanut without the shell.

Now with that peanut in his mouth, he can pickup one of the peanuts still in the shell.


Now he has both peanuts in his mouth and flies away.


This juvenile Western Scrub-Jay watched the activity from the top of the hopper feeder.  The blue feathers on his head, haven't come in yet.
﻿
He wants someone to bring him a peanut.
Other Scrub-Jays would get close but not come up to balcony railing for a peanut.﻿﻿
﻿
Posted by Gary at 8:59 PM No comments:
Labels: Western Scrub-Jay

Color in the Garden

Bushtit in the Cape Honeysuckle

A small flock of Bushtits flew through the garden.  As they were jumping from branch to branch, I was able to get a few pictures of this one eating some small bugs in the Cape Honeysuckle.﻿﻿

Posted by Gary at 8:05 AM 1 comment:
Labels: Bushtit, Cape Honeysuckle

Thanks to Diane for passing along this video about the rescued baby hummingbird.  I saw this sometime last year on YouTube and he now has over a million hits.

Here is his update.
UPDATE!!! When she thought she was ready to leave (and she was) she flew off to her favorite patch of the back yard and her instincts instantly kicked in.  Now she's just like all the other hummingbirds.  For those that are concerned that she has imprinted on humans and wouldn't survive in the wild, don't worry, she is thriving. She has even successfully migrated and returned back to my yard. And for those who think I didn't know what I was doing, I did NOT feed her plain sugar water. I went outside 3 times a day and caught flies from my compost bin in big bags, crushed them and mixed them in as well. I also helped her learn to catch flies while flying (not in the video because you obviously wouldn't be able to see the flies).  In the end, I don't think it could have worked out any better.

Posted by Gary at 9:18 PM No comments:
Labels: Hummingbird, Video

Thanks to Mike for sending me this news story
PORTLAND -- An alert Portland policeman spotted a raptor chick with an injured left leg outside a downtown Portland hair salon Tuesday morning.  Officer McCageor "Cage" Byrd (yes, his real name) was able to grab some towels and a box from a nearby hotel and take the young bird of prey to the Dove Lewis animal hospital. The bird was then taken to the Audubon Society.
The young red-tailed hawk likely fell from the nearby KGW Audubon Rator Cam, according to Audubon officials.  KGW Raptor Cam fans have been following the exploits of three chicks that hatched this spring. Just recently, they had been disappearing from the nest for short stretches as they learned to fly.

If I didn't have the BirdCam taking picture of the Orioles, I wouldn't think there were any in the garden.  In the past two months I have seen a few females and just a couple of males but only briefly.  So imagine my surprise this evening when I stepped out on the balcony and a male Hooded Oriole flew by me then landed on a feeder.  It was about twenty five feet away and looked at me for about fifteen seconds before flying down the hillside.  I quickly grabbed my camera and starting playing Hooded Oriole calls from the iBird App on my iPhone.  In a few minutes the Oriole was back and I was able to get a few pictures.

Last month I went to the La Ballona Valley Bromeliad Show and Sale in Culver City, California, where I purchased these two bromeliads.  I really like the variegation of the plant on the left.  The other plant has a nice bloom and a good size pup. 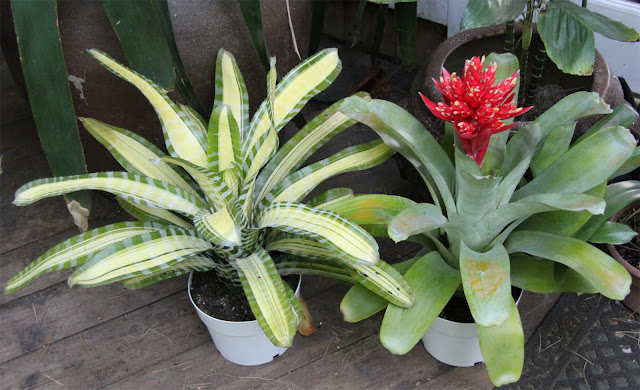 This past week the variegated bromeliad has sent up this incredible bloom. 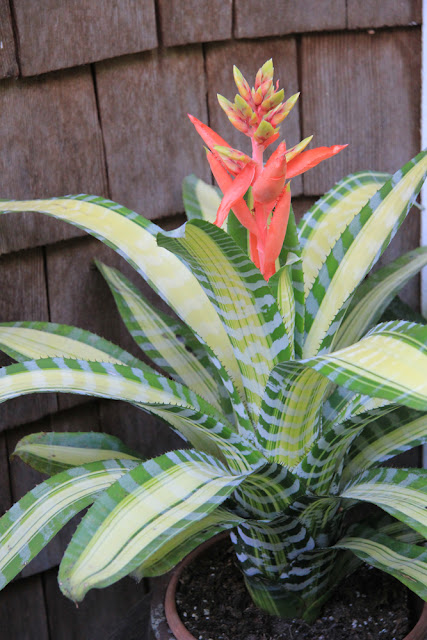 Have them both by the front door our our house, so I get to enjoy them every day. 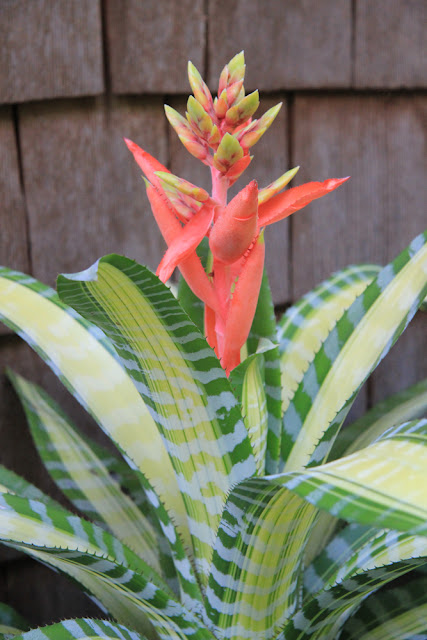