Julie made this blue/green crow mosaic for my birthday.  It looks great and adds some color and whimsey to the garden.  Thanks Julie!
You can see more of Julies mosaics on her blog at http://jooolesdesign.blogspot.com/
There is another link below and on the right hand side under Blogs I follow, go check it out!
Posted by Gary at 8:53 AM No comments:
Labels: Mosaic 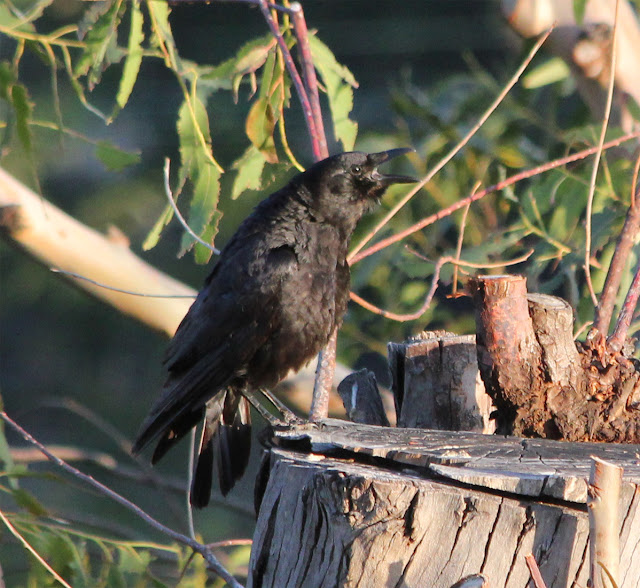 No more grape jelly on the oriole feeder

So the only birds eating the grape jelly on the Oriole feeder are Scrub Jays and Titmice.  Since there are so many of these birds at the feeder, few Orioles were coming to the feeder for nectar.  I still haven't seen a single oriole eat any of the grape jelly.  So when I refilled the feeder with nectar, I cleaned the cover and removed the jelly.  It took a while for the Scrub Jays and Titmice to figure out what happened.
﻿﻿
﻿

They both ended up drinking the water that was in the ant moat!  You can see it in the next video.
So now that the grape jelly is gone and there are fewer scrub jays and titmice, more orioles are coming back to the feeder. 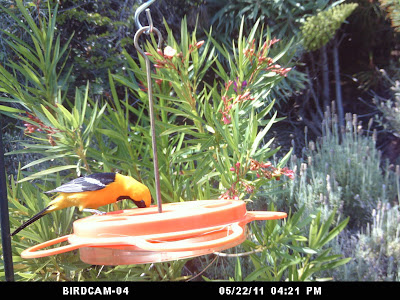 In this next video there are several Orioles eating nectar.  Look close at the first one, I think it is a young male that still has it's Juvenal plumage and some black feathers are starting to come in below it's neck.  The BirdCam shoots 10 second clips of video with sound and I edit them together is some video editing software.  Something is going wrong with the sound and at the 8 second point in each clip there is no sound.  I haven't figured out what is causing that and hope to figure it out soon.  It's annoying.  If you listen closely at the1:05 point in the video you can her a sawing sound.  It is Mike up on the deck sawing the end of a board.  He is replacing a bad board on the deck.  The sawing sound doesn't seem to bother the female oriole.

Here is a still photo of the young male with the black feather just starting to come in under his neck.

Here are some pictures that I recently took of a Black-headed Grosbeak.

Posted by Gary at 10:04 PM No comments:
Labels: Black-headed Grosbeak

The Acorn Woodpeckers have started coming around again.  We recently had the eucalyptus trees trimmed so there are more exposed branches and possibly some insects to eat, but there certainly aren't any acorns.

Here's a juvenile House Finch trying to get a meal from Dad.

Posted by Gary at 10:35 PM No comments:
Labels: House Finch

There is a small flock or "banditry" of titmice in the garden.  I noticed that they would pick the safflower seeds out of the wild bird mix and fly away.  All of the larger birds and especially the crows were devouring the wild bird seed in the platform feeder, so I decided to put safflower seeds into a small two port feeder.  The titmice love it.  I watch from the kitchen window as they fly up to the feeder, take out one safflower seed and fly away.  They don't sit at the feeder and eat like Lesser Goldfinches or House Finches.  I went outside with my digital SLR camera to take some pictures of the titmice.  It was really hard as they don't sit still for a second.  Just as I was getting them in focus, they would jump to another branch.  The auto focus had a hard time focusing too as the birds were among the branches of the trees.  I switched back and forth between manual and auto focus.  Eventually I was able to get a few pictures.


Some of the other birds seemed to be watching me as I photographed the titmice.
Posted by Gary at 9:49 PM No comments:
Labels: Anna's Hummingbird, House Finch, Mourning Dove, Oak Titmouse

My friend Beverly Jackson sent me this link to a video of a robins nest.  Someone got lucky and a pair of robins built a nest in a hanging basket that was on their porch.  They got the full show.  Eggs being laid, hatching, chicks being fed and then chicks flying away.
You can check it out by clicking on this link Robins fly the coop!
﻿﻿﻿﻿﻿﻿
﻿﻿﻿﻿﻿﻿
I wish some birds would build a nest near the house so that I could photograph them!
Posted by Gary at 9:25 PM No comments:
Labels: American Robin, Video

It turns out that the Oak Titmouse likes jelly too.  The BirdCam captured some video and still pictures of an Oak Titmouse eating some grape jelly.


Now maybe I get get some pictures of an Oriole eating some jelly!
Posted by Gary at 11:20 PM No comments:
Labels: BirdCam, Oak Titmouse, Video

The BirdCam captured some video of an Oak Titmouse checking out the Oriole feeder.  He's not able to drink any of the nectare and so far he is not eating any of the jelly.

This still shot is from the video.  The Oak Titmouse jumps around so quickly that the BirdCam has yet to get a good picture. 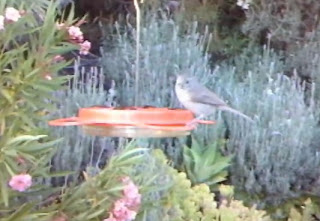 This is the first time I've seen this on the BirdCam.  A Western Scrub-Jay is eating jelly off of the Oriole feeder.  Here is a short video and in the begining he acts like he's not sure what to do. 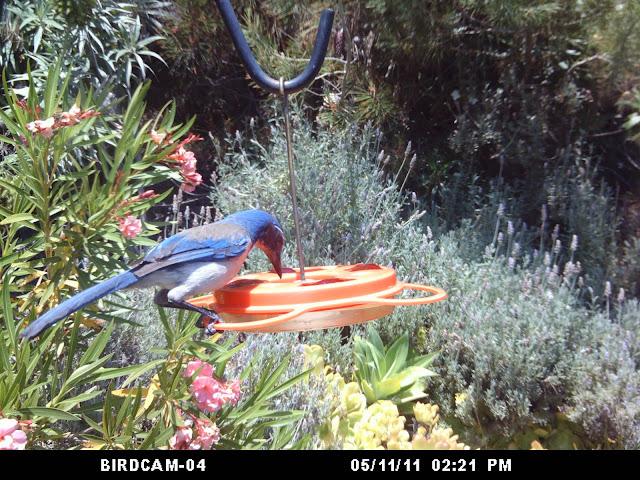 The BirdCam shot some video of a young male Oriole that is beginning to get his adult plumage.  Look at this video and he is the second bird that flies onto the feeder.  It was towards the end of the 10 second clip and he was on the next video before flying away.  Notice that his "bib" has come in, yet he still has the overall color of a juvenile bird.

He was only in these two very short videos.  The BirdCam didn't get any still shots of him either.  I hope he sticks around so we can watch his bright yellow feathers come in.  Below is a screen capture that I got off of the video, sorry its not better quality. 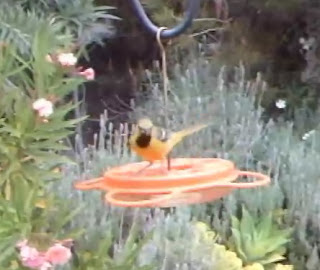 This is a miniture garden display that Mike made for Mothers Day.  It's the center piece of the Mothers Day Brunch Buffett at one of the local country clubs.  I think he did a fantastic job and I thought you would enjoy seeing these pictures. 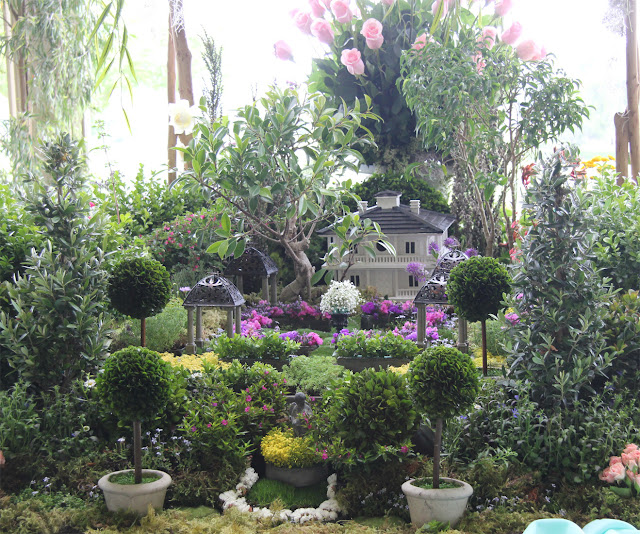 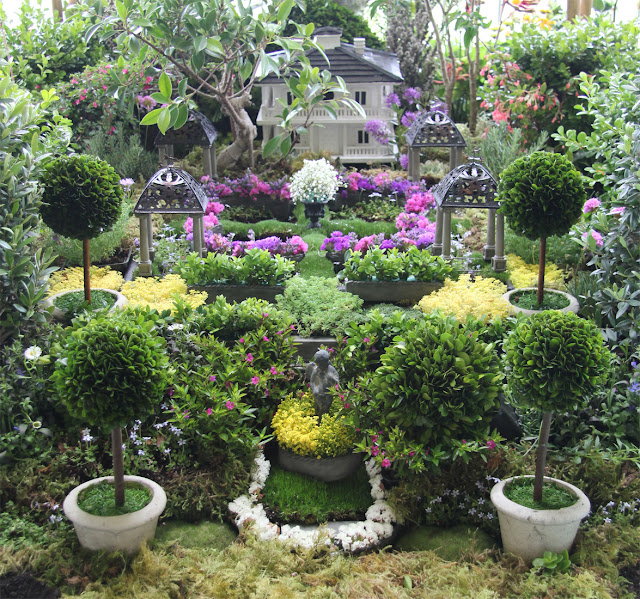 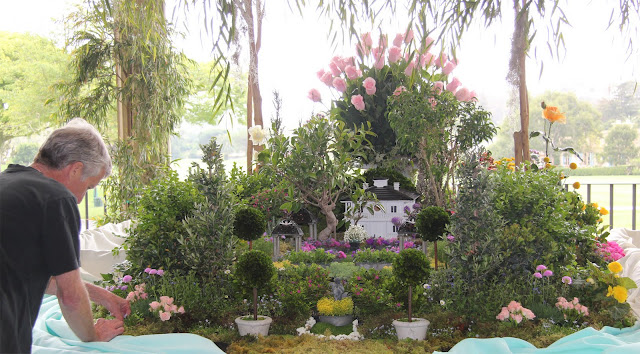 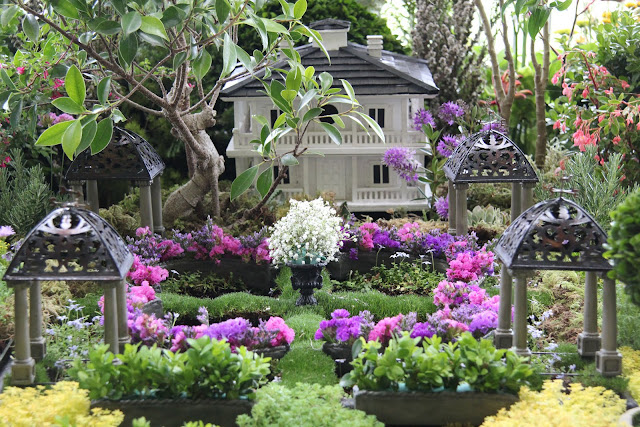 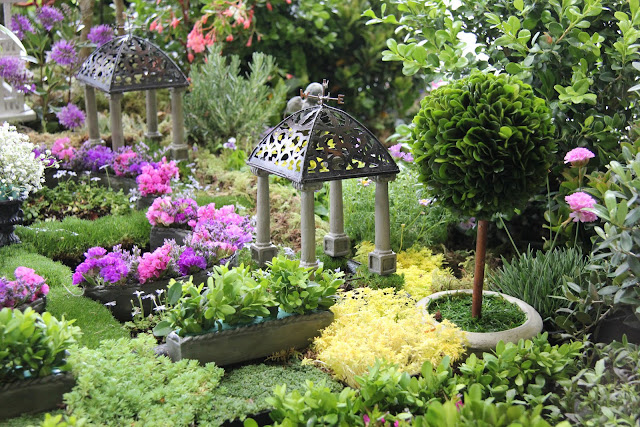 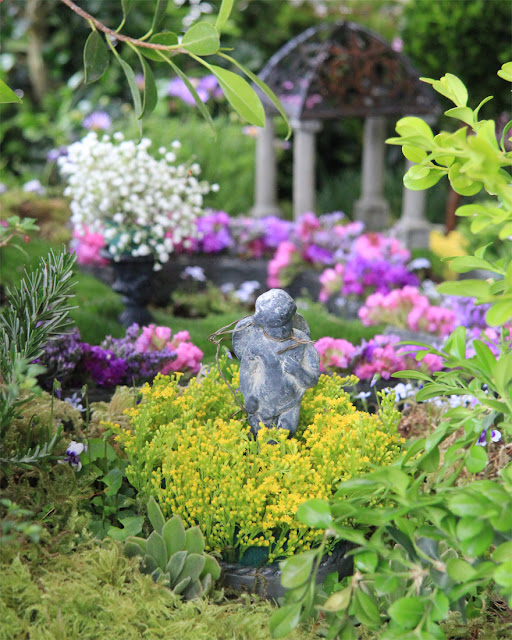 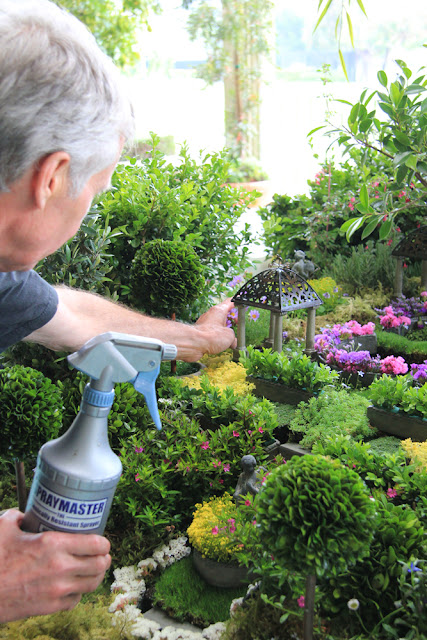 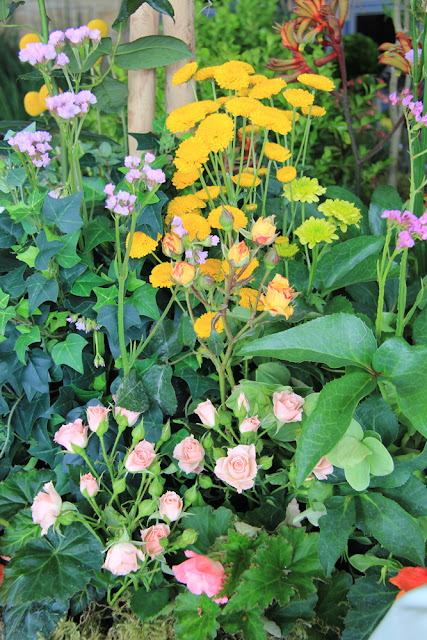 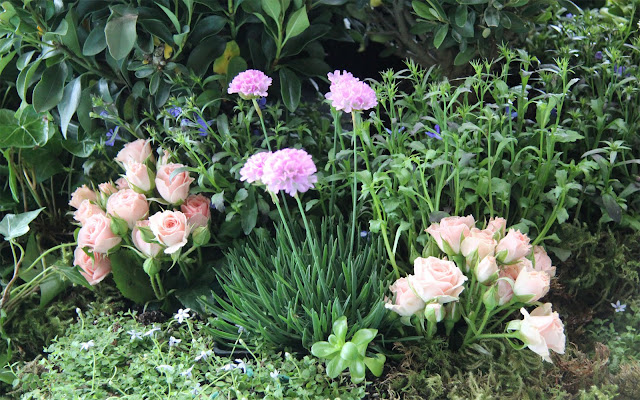 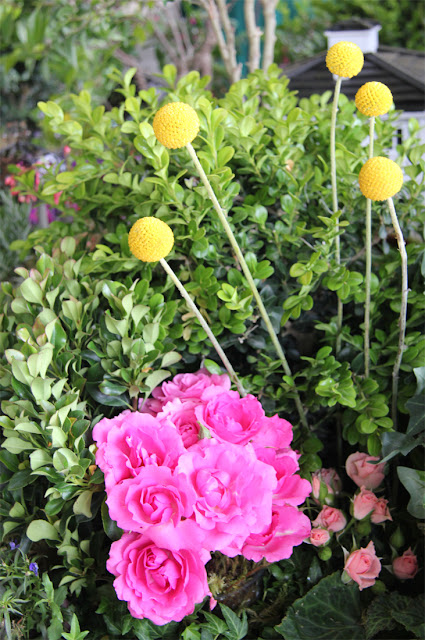 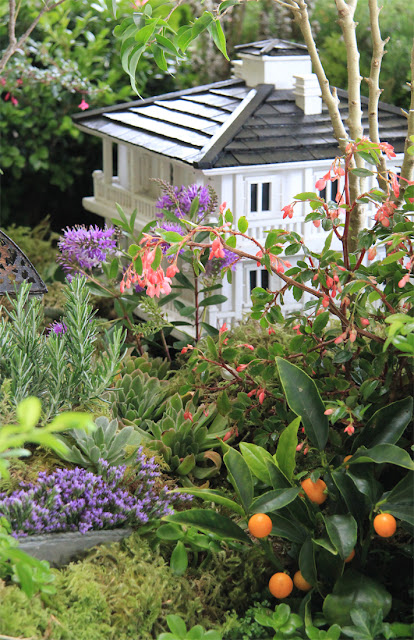 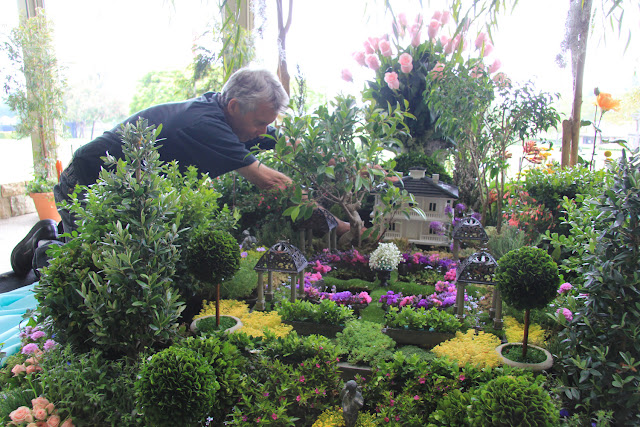 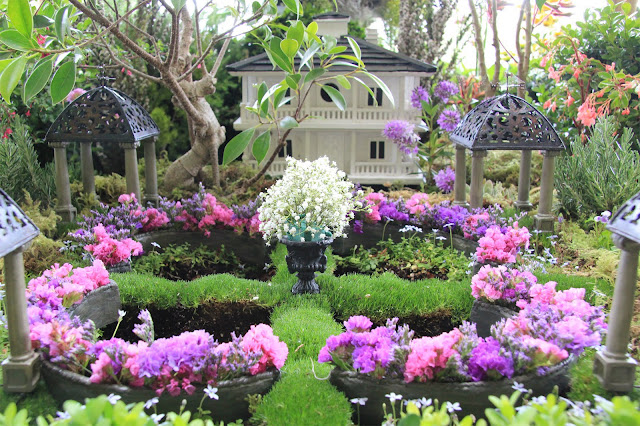 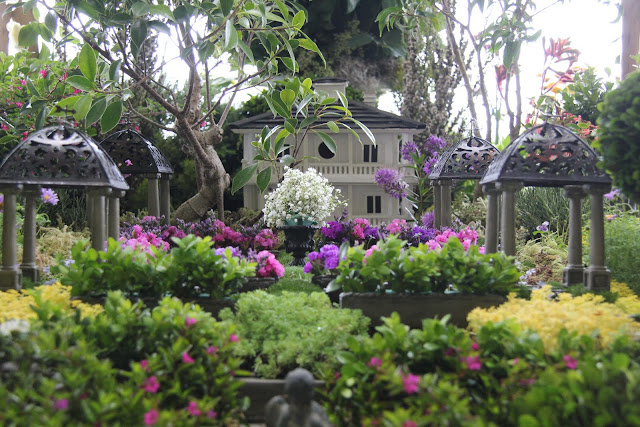