﻿﻿Here are some Koalas, Kangaroos and Cockatoos that I saw on our recent trip to Australia.﻿﻿﻿﻿
﻿
﻿
﻿﻿﻿﻿﻿ This Koala is in the Tidbinbilla Nature Reserve.  There is a protected Eucalyptus Forest that contains 9 Koalas.  We walked the main path in the 48 acre Eucalyptus Forest and only saw this guy.  He is a recent arrival who was brought in from another forest to increase the Koala population.  Sadly a wildfire in January 2003 destroyed the reserve and killed 24 Koalas.  A new group of Koalas have been introduced and with successful breeding the population is up to 9 Koalas.  This guy is in an open air enclosure for observation until he is released into the Eucalyptus Forest.  We searched the trees high and low for Koalas but they can blend in so well and frankly 48 acres contains a lot of Eucalyptus trees.  We were the only ones on the trail, so there was no help spotting Koalas from rangers or fellow tourists.  So I was very happy to photograph this fellow and he was very active when we approached him.  In my previous encounters with Koalas, they were always asleep and or presented their backside.  So I was surprised to see this guy eat, walk around and jump from one branch to another.  Since he is the "new man on campus" I thought there might be some girlfriends sitting in the nearby trees checking him out, but no such luck.  Soon he will be released into the Eucalyptus Forest and hopefully more baby Koalas in the near future.
﻿﻿﻿﻿﻿

Driving along the road we saw a troop of Kangaroos doing what most animals do, sleep eat and scratch. 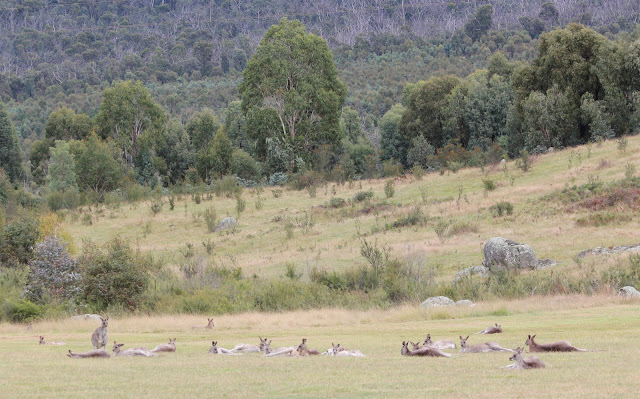 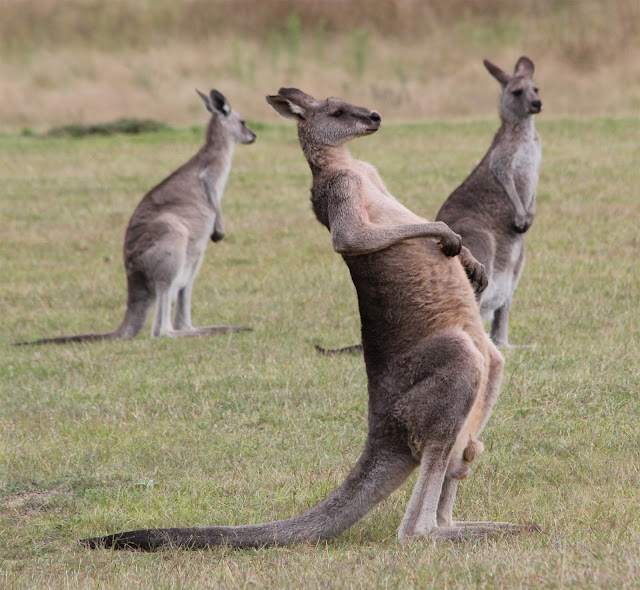 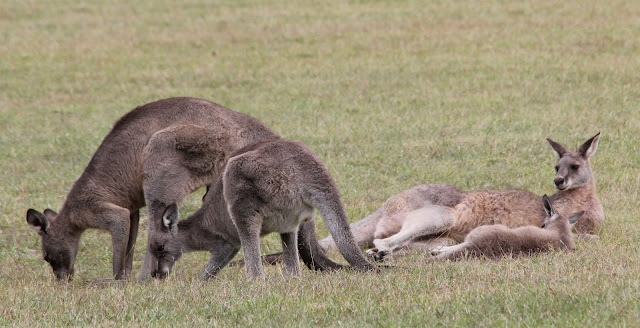 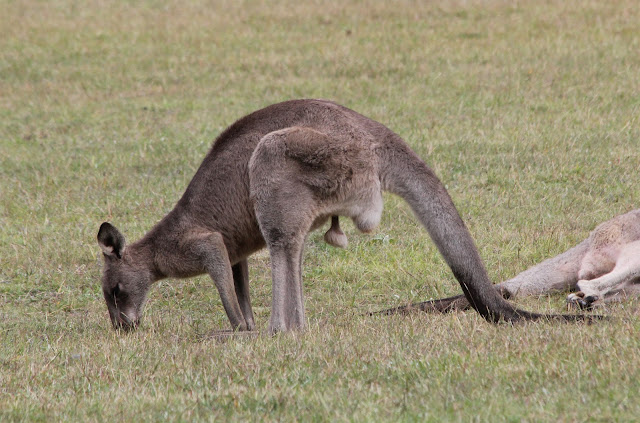 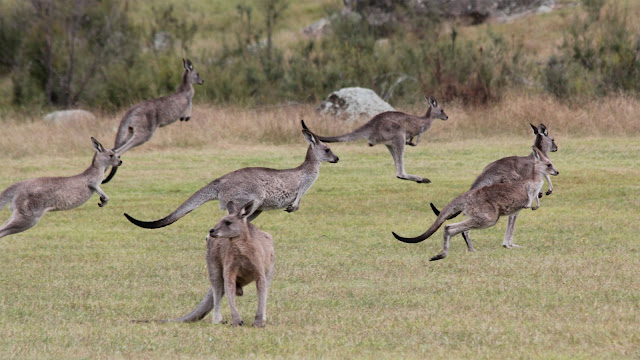 Then something happened and they all started hopping to the right.  It had a Jurassic park quality as the hopped in near unison. 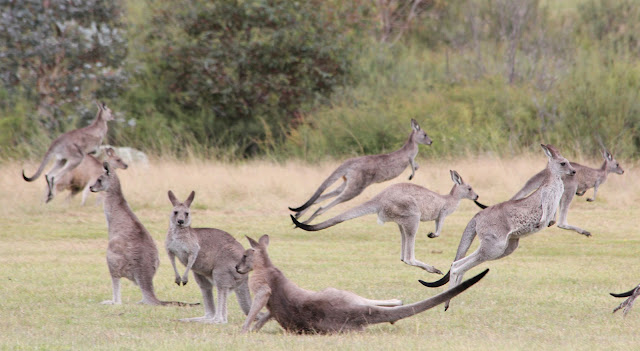 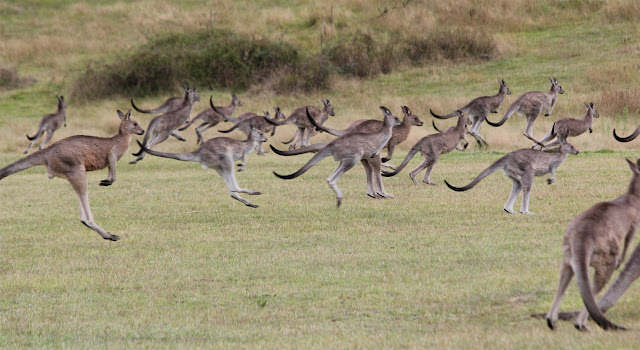 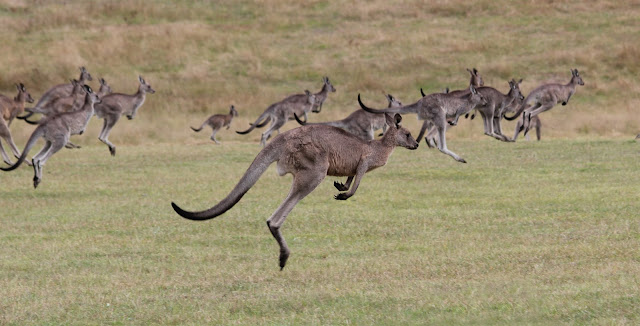 Then they all stopped at the same time.  It's like they were playing musical chairs and the music stopped. 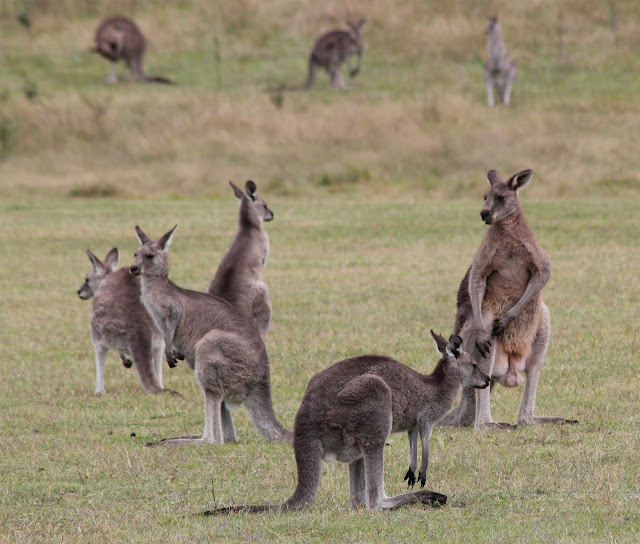 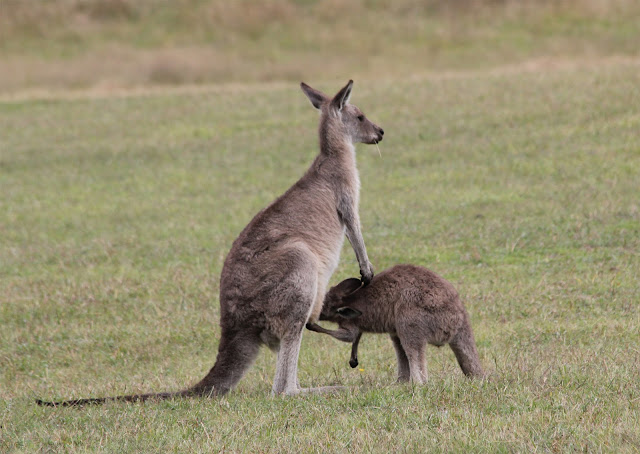 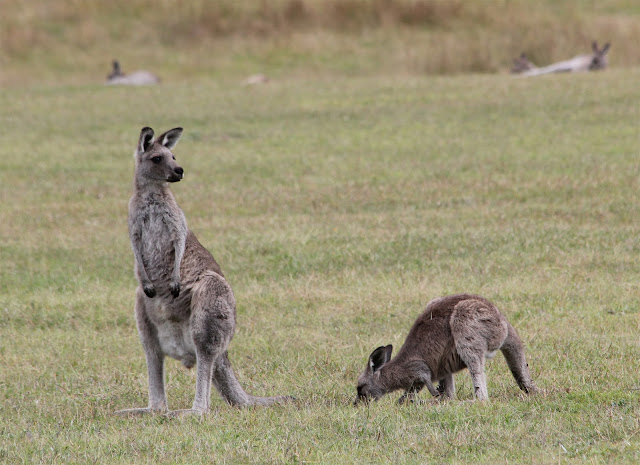 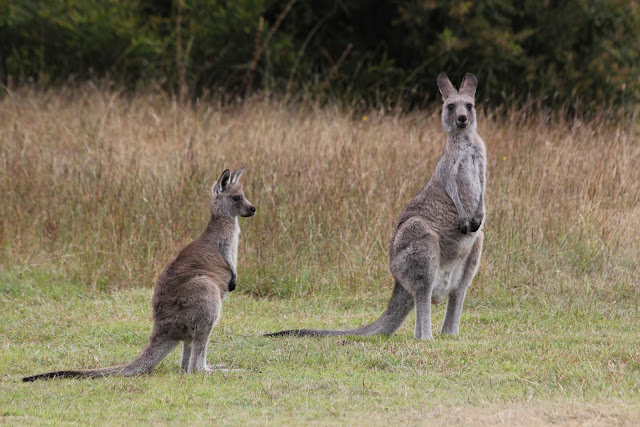 Nearly everywhere we went, we saw and heard Cockatoos.  They can squawk really loud as they fly. 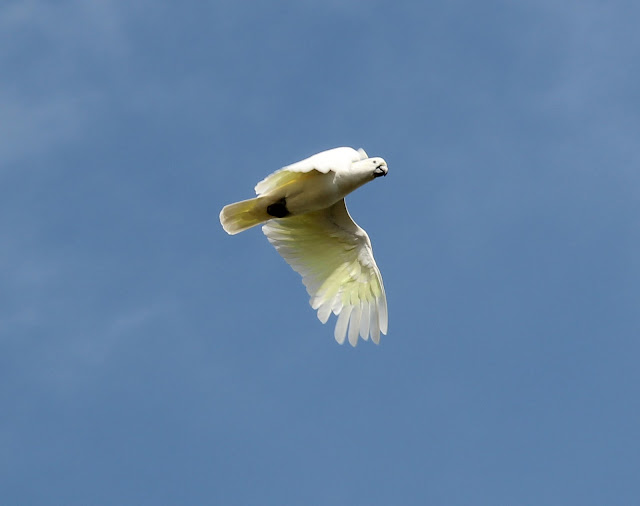 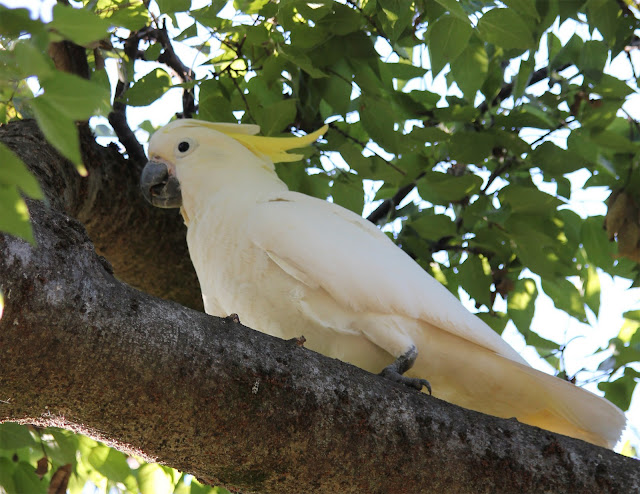 Australia - Birds and other critters

Here are some birds that I saw on our trip to Australia, some are unusual and some not so unusual.


We also saw some Iguanas. 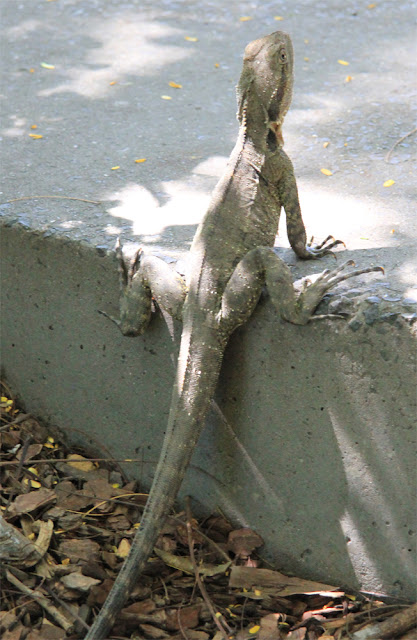 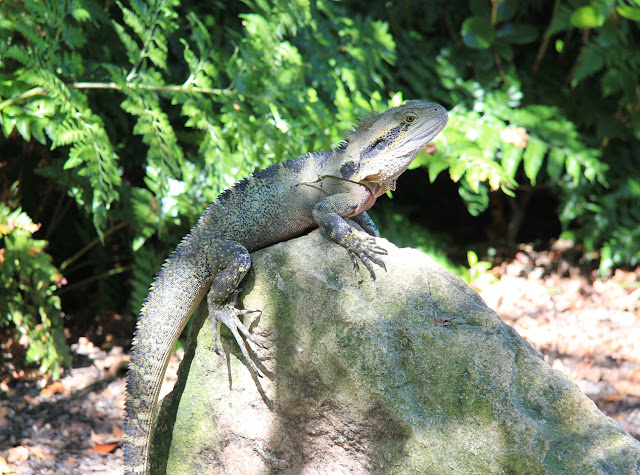 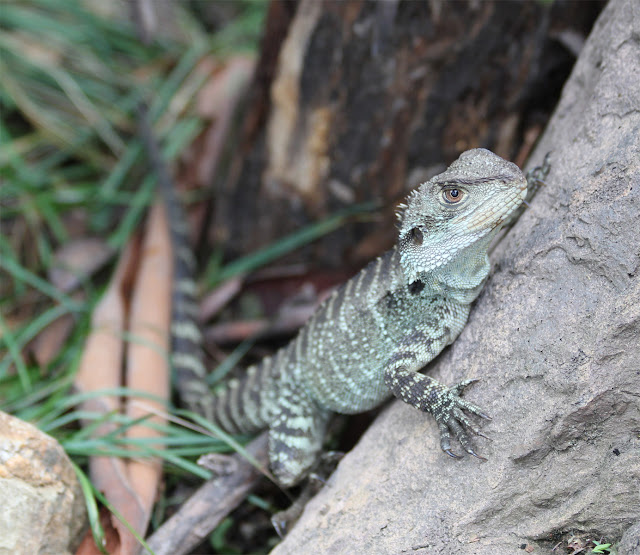 Australia - Watch your step in the Garden!

In the Albury Botanical Garden I saw this sign warning about the deadly brown snake.  Fortunately we didn't see any.

However Mike did see this snake along the paved path in the Tidbinbilla Reserve. 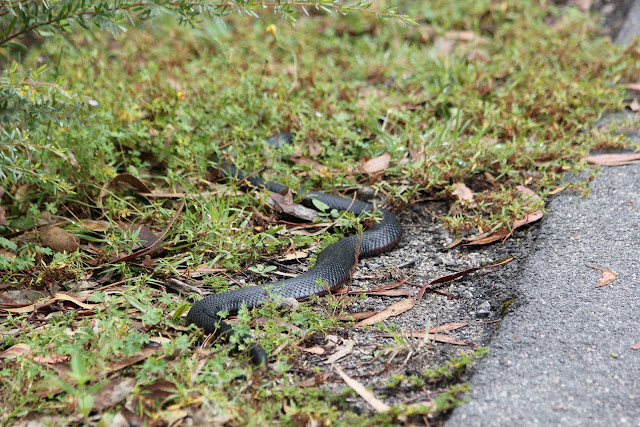 Mike was as close as four feet from this Red Bellied Black Snake when he first saw it. 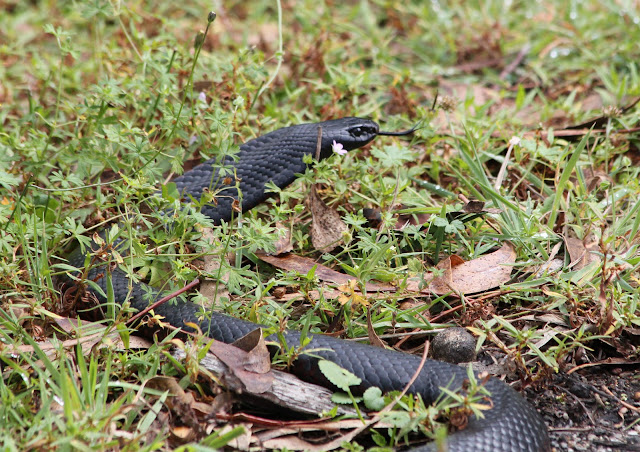 We later found out that it is very poisonous.  It's claim to fame is that it can can give birth to up to 40 live snakes at one time and the young will stay near the mom for up to 1-2 years.  When the Red Bellied Snakes gets agitated, it's body will flatten behind the head, kinda like a Cobra and in the picture below. 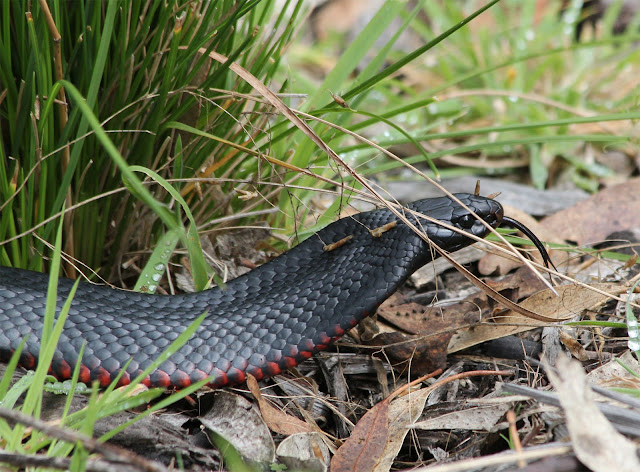 If I had known all of that I probably would not have gotten so close to get this picture.  Fortunately it's not aggressive like the Brown Snake and when it's agitated it tries to get away.
Posted by Gary at 10:40 PM No comments:
Labels: Australia, Red Bellied Black Snake 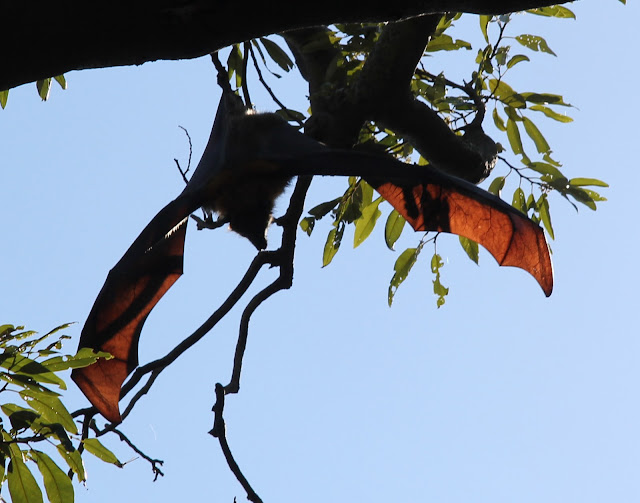 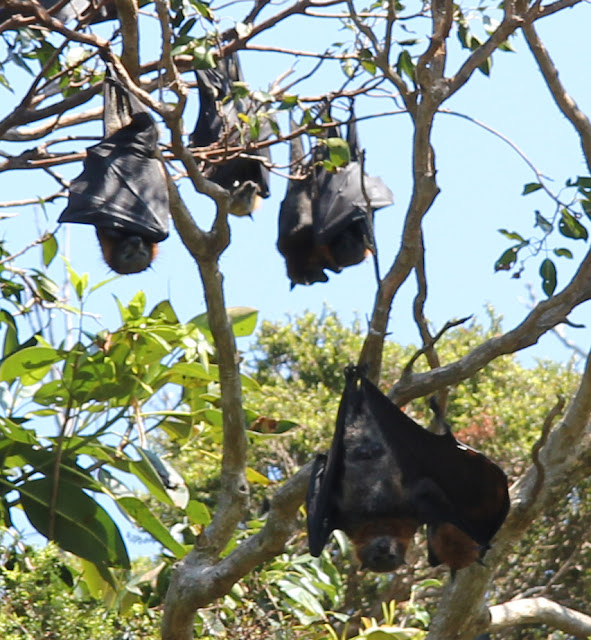 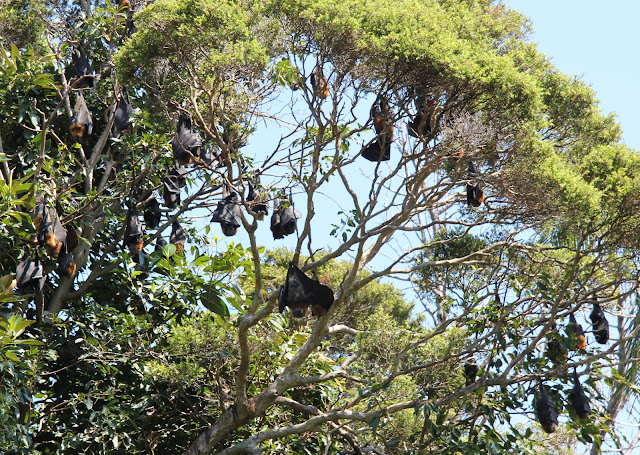 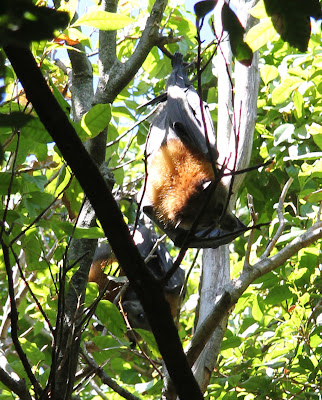 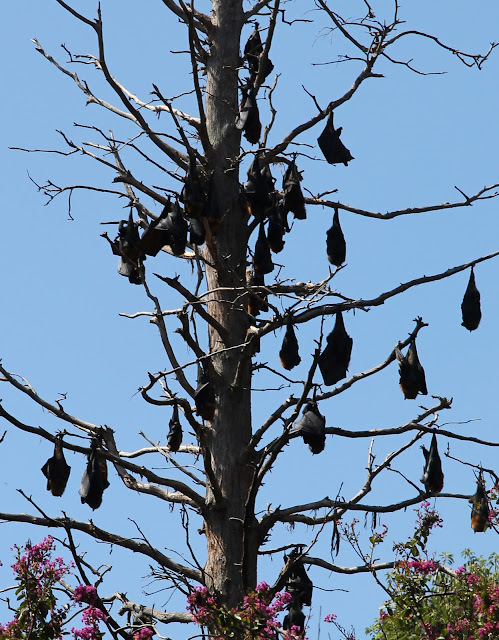 All of these Flying Foxes are in the Sydney Royal Botanical Garden and they are a real pest.  They are overwhelming the garden and slowly killing some trees.  The garden has recently received approval to use non-harmful methods to discourage them from roosting.  The Botanical Garden in Melbourne uses sound blasts to scare them off.  The blasts are every ten seconds and they are annoying. 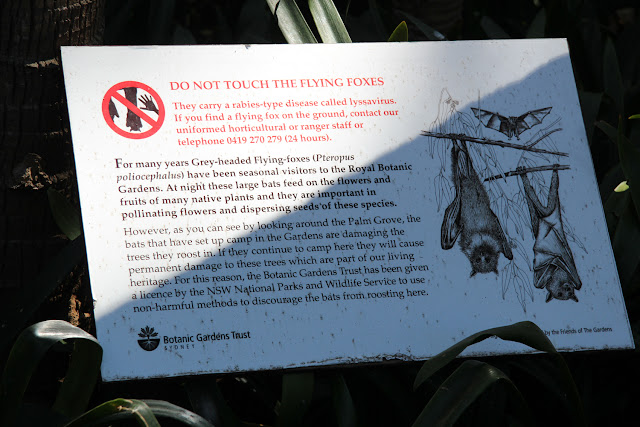